Allow me to introduce the two newest members of our "flock", John and Annie, a working pair of Maremma's that I stumbled onto after one of my sheep buyers saw the ad.
John and Annie's herd of 200, as well as another pair of Maremma's were sold and are on their way to the state of Washington and so they are out of a job.  Mike and I went to see them on Wednesday and when we found out they had the same names as our little niece and nephew, we knew they were meant to be our dogs.

This day has thrown a few zingers at me......first thing is a sick ewe, shivering in the sub zero cold.  We got her in a thick coat, warmed a vitamin/energy supplement gave it to her, got some nice alfalfa hay for her and bedded her down in a warm hutch.  All the while I've got an upset llama spitting at the back of my stocking cap.  She's only doing her job, so it's tough to scold her, I only reassure her that we are truly helping one of her charges.
Then, I notice my mare that foundered earlier last year laying in the snow.........so now she's showing founder symptoms again.  We feed her 100% grass hay, but in an attempt to stave off the cold we must have let her have more than her system will allow.  She's up and moving about, so it's not severe,  but now we will have to meter back her hay rations.  When it gets this cold, I like to give as much hay as possible, but that's just not going to be something we can do with her.  Another snaffoo.
And, lastly, I'm terribly disappointed in our sheep registry President........they just seem to be sending the message that they really don't have to tell us anything.  I had high hopes that they would keep their word and give us answers to our numerous questions.

I'm sure most of you are aware of the current issues with NASSA and the new BOD's.  I won't go into the details, nor will I bad mouth anyone.  I only am encouraging those of you that are members of NASSA to become a member of the NASSA chat list and encourage you to update yourself on what is happening within your breed association.   You have to be a member of North American Shetland Sheep Breeders to join.
Here is the link:  http://pets.groups.yahoo.com/group/Chat_with_NASSA/
Visit the chat list and familiarize yourself with the discussions, there's a lot of great information on there besides the current state of affairs, and a lot of valuable experience and knowledgeable breeders.

I really hate to post this, but something is pushing me to do so.  We have a friend in our small town of Monroe that has a 13 yr. old daughter that was just diagnosed with white blood cell leukemia last Thursday.
This man works all night cleaning, he's a self employed individual, and then drives to Madison every day to be with his daughter at the American Family Children's Hospital.  His daughter currently has pneumonia, tumors in her heart and cancer cells in her spine.  Yesterday she suffered a collapsed lung and today is the 2nd of her spinal taps in the last few days.  As you have probably already guessed, her treatments are not fun, but from what her dad tells me, she's a fighter and has a great outlook.
My question to you is, what can we do for this family?  I'm looking for ideas on how to help them.  The immediate need that we can see if that they are doing a lot of driving, so we are going to get them gas cards, and possibly some gift cards for groceries.  I know a fair amount of people are touched by this horrible disease every year, so I'm wondering if anyone can help me in figuring out what we can do to help besides gift cards.
Posted by Kelly at Friday, January 07, 2011 6 comments:

Just got introduced to knitting socks, and so I decided I would jump in with both feet (no pun intended) and learn the two socks at a time on one circular needle technique as well.  I started with the toe up method, as our avid sock knitter at the mill love this style of doing socks.  I'm to the point where I will start the ribbing now and thought I would take a quick photo and post it here.
So, here's my first sock attempt......... 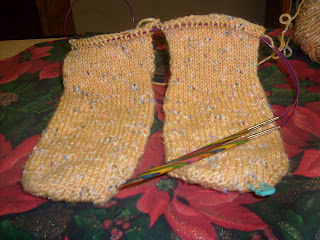 I'm not entirely sure why Cookie, our white llama has such a time getting hay stuck in his halter.  He's the only one of our 4 camelids that seems to have this problem, must be the way he ruts around in the hay bunk.
But you can see he's definitely not ok with me grabbing the long piece that is sticking straight up and making him look pretty goofy, although I'm not sure he needs much help in that department.  Sorry Cookie.

Some of my family and hens in the snow

Nothing gets Tess as excited as SNOW, she loves it, she barks to be let out when it snows and no matter how old she gets, she can't stop playing in it. This is one of her favorite games.............

After 10-14 minutes of digging, she will give up and move to another snow pile and begin the process all over again.  Makes me laugh and smile every single time.
Maybe some day I will actually hide something in a snow pile for her to find, but after 9 winters of following this procedure religiously, she never tires of coming up without the booty she frantically tries to find.  Gotta love it.
Now the cats..............who can explain why cats do what they do?  Certainly not me.