Ice, Snow, Ice, Rain, more snow, more ice........that about sums up our weather the last couple weeks.  The various types of precipitation that we've experienced lately has resulted in a large amount of ice in our fields, in the sheep lot and our driveway.  Yesterday the sun came out and it started to get warm enough to melt a bit, this is generally a good thing, but all it did was put a super glass-like surface to the already treacherous ice in the sheep lot.   I went down to do chores after getting home from work and I threw out the hay bales to the sheep, llama and alpaca.  I am usually mobbed immediately, but there were only a few sheep around me and the hay.  A large group of the pregnant ewes had gotten on the other side of the fence that separates the lot and since they had to cross a huge, very slippery ice "flow" to get through the gate, they weren't going to chance it.  I grabbed a bunch of hay, and put down a trail from where they were, through the gate and to the main lot. 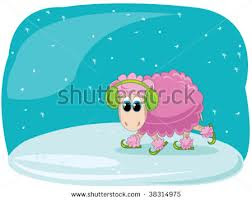 Then I noticed that both llamas were eating, but our alpaca wasn't there.  I headed for the walk in shed and as soon as I rounded the corner I see poor Abe laying on a giant sheet of ice and he's tight against the gate and can't move.  No amount of prodding  would get him to move, it was apparent that he had given up trying to stand on the ice.  So I pushed him on the ice until we reached the shed and once there I supported his back end until he got up and I was able to get him inside.  He couldn't even straighten his back legs, and he was a very cold little fella.  He must have been laying there for hours......sigh.

We bedded the shed with a lot of clean straw, got him fresh hay and water and he was eating and appeared to be fine by 10 pm.  I'm hoping he doesn't develop anything from his ordeal, we will just continue to watch him carefully.  My husband said he's going to take the skid loader out there and use the bucket with teeth to score the ice and rough it up so it's easier for our animals to stand until it melts.
Today it got to 43 degrees, so we'll see what kind of mess we have when we get home today.......blech.
Stay upright and off your arse everyone.
Posted by Kelly at Wednesday, February 13, 2013 No comments:

February is so boring

While I wait for the season of insanity.....aka lambing season.......please enjoy a few photos that I took around the ole "ranchola" the last couple days.