Clearing up some lies

We had a fantastic week in Estes Park at the fiber festival held there June 11th & 12th.  We meet some new people, reconnected with some old friends and aquantainces and just really had a great time.  Our 1st ever FFSSA sponsored show was held in conjunction with the Estes Park Wool Market and everyone was so easy to work with and friendly that we vowed we'd be back!
We had no idea there was someone there that would say or do anything to discredit our sheep, our wins in the show ring, our judges and our integrity.  I'm not going to name this person, it's not really my style to do that, but I do want to make it clear that a lot of what she's is saying is either skewed for her own agenda or an outright fabrication.   I have all the comments from the Heritage Facebook page, so I know the intent wasn't changed nor the wording.

1) First on the list is the accusation that our judge, Jim Chastain, sponsored the show.  He did not.  His ex-wife sponsored 2 classes and he wasn't even aware she'd done so until he showed up at the fairgrounds on Thursday night and I told him.  Complete fabrication.

2) Jim did not speak to this person, she claims he told her he was judging on fleece only.  Jim spoke to the exhibitor of one of the sheep that was shown and that exhibitor said why her sheep wasn't placed higher.  The exhibitor said: "his words were.... it was hard to place sheep who were sheared where he couldn't see much fleece"
He stated several times during the show that he judged on structure, but the fleece weighs heavily in his decision because it's a big part of the sheep's value to those making a living from the Shetland Island.   He also said structure weighs heavily because he considers them a dual purpose breed for the same reason the wool is important, the Islanders have to be able to have a good carcass animal.  The statement posted on FB stated that "he said he didn't place her higher because he was only concerned with the fleece."  By inserting the word "only" the meaing of that comment completely changes.  Half truth.

3) The classes were not placed largest to smallest in the FFSSA show nor in the Classic show on Sunday.  Jim did tell the exhibitors that judging lambs that are so young is really difficult, especially when the lambs are put up against adult sheep that have matured into what they will be for sheep.  Complete fabrication.

Here is a shot of the placing from right to left for the ram class on Sunday.  Does this look like sheep being placed from largest to smallest? 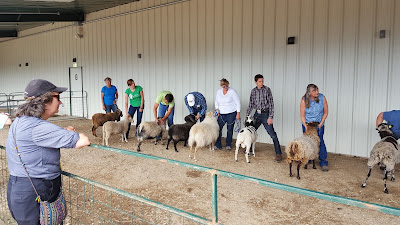 The insinuation that overly large animals were chosen as the best examples is false and clearly was said as an attempt to discredit our show, our judge, the exhibitors and their sheep.  Making that statement insults every person that won a ribbon, it's saying that their sheep are only winnning because they were big.  In my opinion, it's a slap in the face to everybody that participacted in the show and I'd like to publically apologize to everyone for any insult this might have caused  the good hearted folks that showed up to support our show.

4) It was stated by this same person that they congradulated myself, Garrett Ramsay on our success in the show ring........that is a complete fabrication.  I have never met this person and am only guessing that the person in a few of our photos is this person because someone said they spoke to her briefly.   I would never, ever snub anyone and would never be unkind or dismissive.  Anyone that has ever met me know that I don't have to agree with you to be kind and friendly.  That being said, I do get quite upset when there are personal attacks on myself and others that are not based in fact, but simply fabrications to further an agenda.
5) Speaking of agenda......it was suggested on the Heritage FB page that FFSSA and our members have an agenda.  Well, at least that was accurate, we do have an agenda and that agenda is to promote and educate, mentor and support breeders that breed 1927 Standard Shetland sheep.  We've been pretty clear that's what we do, so I don't know why it's a shock to anyone.  The person making all thes false accusations said she overheard us saying (in an unkind way) that Tracy Hoffman was trainable and yes, we did say that, but we were talking about training him to be a Shetland judge versus a livestock judge.  We felt he was open to learning the finer points of Shetland sheep and not just placing them according to size or the amount of wool they carry around.  THAT is what we were talking about, and if you had walked up and asked us, we would have told you that.  We all know the damage that has been done to the Shetland breed from judges that aren't trained and know nothing about the 1927 Standard, so yes, we felt he was a good candidate for showing him more and a lot of his research was done in his hotel room on the interent on Saturday night because he said he wanted to do right by the Shetlands.
6) We do not "Want to take down NASSA"!!!  We believe that there are breeders that simply want to breed for the fleece types they accept and have no issue with this at all!!!   We have never had a take down on our agenda, never will, so please stop spreading this vicious lie.  Raise and breed what you want, but stop attacking us and then making it look like you are being attacked, it's sheep people.........SHEEP!    It's not about money and sales, if I wanted to make money, I wouldn't be picking Shetland sheep as the breed to make a profit, so let's stop making that accusation.  Most of us breed 20 or less ewes a year, we don't do it for the money.  Good grief.....how ridiculous.

In closing I'd like to express my extreme disappointment that someone finds it necessary to go to such lengths to insult the integrity of so many people and their sheep.  We are not out bashing NASSA, there are a lot of our friends and great folks in NASSA.  We are not our there bashing this person's sheep or her decision to raise them.  We are at home, enjoying our sheep, our choices and promoting them in order to educate others.  It would seem that has painted a target on our backs and I had hoped the attacks on the Heritage page would subside, instead they have escalated to outright fabrication and at best, half truths.  A line has been crossed when you question a person's integrity and I wanted to address the statements because I feel this is a diliberat attempt to do harm to my flock success and the success of FFSSA.

Thank you to all those that supported our show and conintue to support what we do.